Last week I had a new paper come out with some fantastic co-authors (Delavane Diaz, Tom Hertel, and Uris Baldos) on new damage functions in the agricultural sector. Here I thought I’d dig a bit into what I see as some of the main contributions.

Firstly what we do. Essentially this is an exercise in trying to link a damage function directly to the scientific consensus on climate impacts as represented by findings in the IPCC. We therefore rely on a database of over 1000 results on the yield response to temperature previously published by Challinor et al. and used to support conclusions in the food security chapter of Working Group 2. We do a bit of reanalysis (using a multi-variate regression, adding soybeans, allowing for more geographic heterogeneity in response) to get yield-temperature response functions that can be extrapolated to a global grid to give productivity shocks at 1, 2, and 3 degrees of warming (available for other researchers to use here).

Getting productivity shocks though is only half the battle because what we really want are welfare changes. Therefore, we introduce our productivity shocks into the 140-region GTAP CGE model, which has a particularly rich representation of the agriculture sector and international trade. This then gives us welfare changes due to agricultural impacts at different levels of warming, which is what we need for an IAM damage function. Finally, we take our findings all the way through to the SCC by replacing the agricultural damages from FUND with our new estimates. Our headline result is that improving damages just in the agricultural sector leads the overall SCC to more than double.

There’s lots more fun stuff in the paper and supplementary information including a comparison with results from AgMIP, some interesting findings around adaptation effectiveness, and a sensitivity analysis of GTAP parameters. But here I want to highlight what I see as three main contributions.

Firstly I think a major contribution is to the literature on improving the scientific validity of damages underlying IAM results. The importance of improving the empirical basis of damage functions has been pointed out by numerous people. This is something Delavane and I have worked on previously using empirically-estimated growth-rate damages in DICE, and something that Sol Hsiang and co-authors have done a lot of work on. I think what’s new here is using the existing biophysical impacts literature and tracing its implications all the way through to the SCC. There is an awful lot of scientific work out there on the effects of climate change relevant to the SCC, but wrangling the results from a large number of dispersed studies into a form that can be used to support a global damage function is not straightforward (something Delavane and I discuss in a recent review paper). In this sense the agriculture sector is probably one of the more straightforward to tackle – we definitely relied on previous work from the lead authors of the IPCC chapter and from the AgMIP team. I do think this paper provides one template for implementing the recommendation of the National Academy of Sciences SCC report around damage functions – that they be based on current and peer-reviewed science, that they report and quantify uncertainty wherever possible, and that calibrations are transparent and well-documented.

Secondly, an important contribution of this paper is on quantifying the importance of general-equilibrium effects in determining welfare changes. Since so much climate impacts work estimates local productivity changes, it raises the question of what these can or can’t tell us about welfare under global climate change. We address this question directly by decomposing our welfare changes into three components: the direct productivity effect (essentially just the local productivity change multiplied by crop value), the terms-of-trade effect, and the allocative efficiency effect (caused by interactions with existing market distortions). The last one is generally pretty small in our work, so regional changes in welfare boil down to a combination of local productivity changes and the interaction between a region’s trade position and global price changes. This breakdown for 3 degrees of warming is shown below 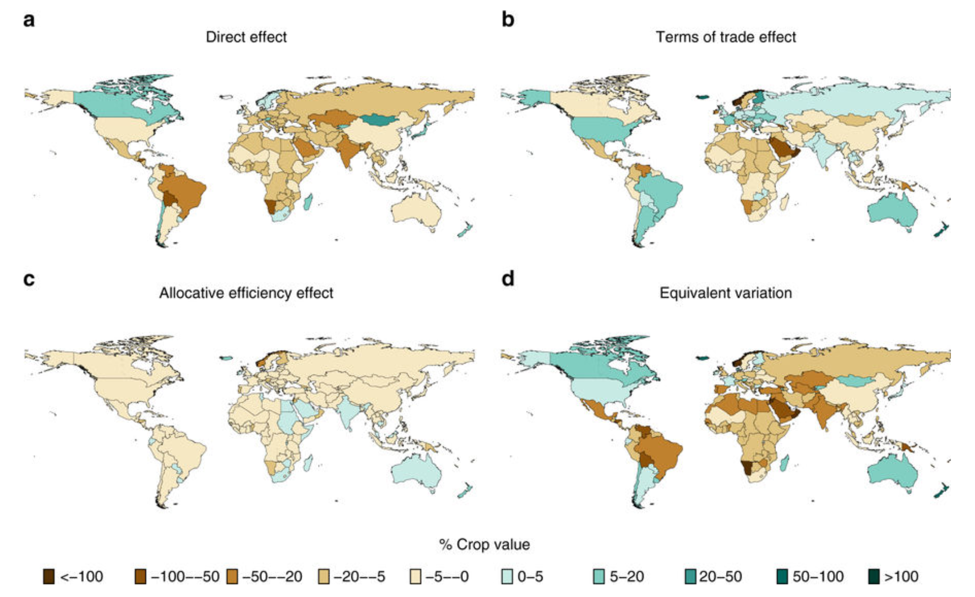 For these productivity shocks, the terms-of-trade (ToT) effect is regionally pretty important. In a number of cases (notably the US, Australia, Argentina, and South Africa) it reverses the sign of the welfare change of the productivity effect. In other words, a number of regions experience yield losses but welfare gains because the increasing value of exports more than compensates for the productivity losses (with the opposite in South Africa). There are a few rules-of-thumb for thinking about how important the ToT effects are likely to be. Firstly, the ToT effects cancel out at the global level, so if you are only interested in aggregate global damages, you don’t have to worry about this effect. By similar logic, the higher the level of regional aggregation, the less important ToT effects are likely to be, since larger regions will likely contain both importers and exporters. Secondly, the importance of ToT effects depends on the magnitude of relative price changes which in turn depends on the productivity shocks. If the effect of climate change is to redistribute production around the globe rather than to increase or decrease aggregate production, then ToT effects will be smaller. We see this in our AgMIP results, where losses in the tropics are offset to a greater degree by gains in temperate regions, leading to smaller price changes and correspondingly smaller ToT effects.

A final point I’d like to highlight is the quantitative importance of our findings for the SCC. We knew from previous work by Delavane that agriculture is important in driving the SCC in FUND. Nevertheless, such a large increase in the total SCC from updating just one sector, in a model that contains 14 different impact sectors, is striking and begs the question of what would happen with other sectors. Moreover, there are suggestions that other models might also be underestimating agricultural impacts. Neither PAGE nor DICE model the agricultural sector explicitly, but both include agricultural impacts as part of more aggregate damage functions (market impacts in PAGE09 and non-SLR damages in DICE 2013). By coupling damage functions from these models to standardized socio-economic and climate modules, we are able to make an apples-to-apples comparison of our agriculture-sector damages with these damage functions. The graph below didn’t make it into the paper, but I think is informative: 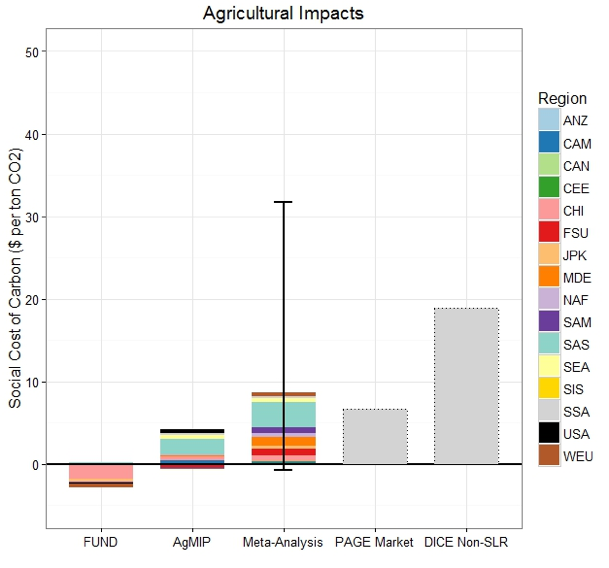 What you see is that our estimated agricultural damages (from the meta-analysis of yield estimates) are actually larger than all market damages included in PAGE. This indicates either that there are very small negative impacts and large off-setting benefits in other market sectors, or that PAGE is substantially under-estimating market damages. Comparing our results to DICE would imply that agricultural impacts constitute 45% of non-SLR damages. This seems high to me, considering this damage function includes both market and non-market (i.e. mortality) damages. For instance, in their analysis of US damages, Sol Hsiang and co-authors found agricultural impacts to be dwarfed by costs from increased mortality, and to be smaller than effects on labor productivity and energy demand, suggesting to me that agricultural damages might also be currently under-estimated in DICE.

That’s my (excessively-long) take on the paper. Do get in touch if you have any questions or comments on the paper – fmoore at ucdavis dot edu.

This author has yet to provide a bio.

Comments on this entry